The portfolio is composed of high-quality tenants with strong credit and provides the investor with access to a diversified portfolio.

The portfolio is composed of high-quality tenants with strong credit and provides the investor with access to a diversified portfolio. First year net operating income is diversified as follows: 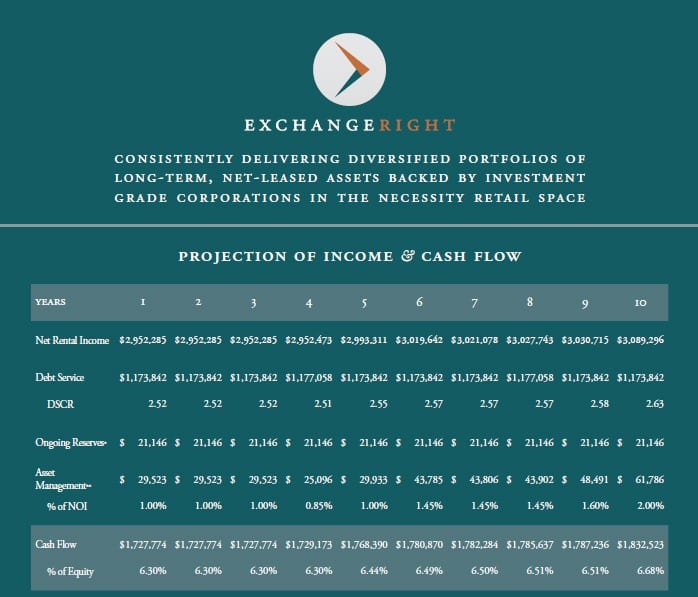 *$372,464.82 of initial tax reserves, declaration deposit, and reserves for operations and repairs have been funded at the time of the loan closing.
**Asset Management Fees include Annual DST Trustee Fees.

Investing in this offering involves risk. Please review the Private Placement Memorandum in its entirety, including especially the section that outlines the risks of this offering, before making any investment decision.

Kroger (NYSE: KR) was founded over 130 years ago. It is the largest supermarket chain in America by revenue. Its assets total over $30 billion. It is also the second largest general retailer and the 23rd largest company. It was ranked 24th on the Fortune 500 in 2014, during which its stock rose over 90%, making it the 10th best-performing stock on the list. It moved up to #20 on the Fortune 500 in 2015, #4 in the Food and Drug Store industry on the industry’s list of the World’s Most Admired Companies, and #1 for Financial Soundness. As of December 2015, Kroger operates 2,600+ supermarkets and department stores, 2,120+ pharmacies, 1,350+ fuel centers, 780+ convenience stores, 320+ jewelry stores, and 35+ food processing or manufacturing facilities, which together serve over 8 million customers daily. Kroger employs over 400,000 individuals throughout 34 states. Kroger
operates under 20+ local names, including City Market, Dillons, Food 4 Less, Fred Meyer, Fry’s, Jay C, King Soopers, Pick ‘n Save, QFC, Ralphs and Smith’s. Kroger recently expanded its footprint by more than 150 stores through its $800 million acquisition of Roundy’s, adding the Wisconsin geography and over 30 Mariano’s locations in Chicago. 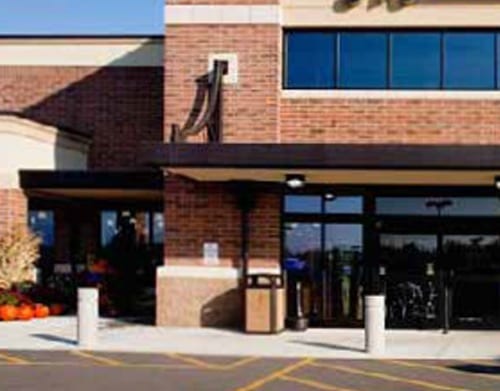 Walgreens (NASDAQ: WBA) is the largest drug retailer in America. Walgreens employs approximately 248,000 people and operates 8,678 stores throughout the 50 states; Washington DC; Puerto Rico; and Guam. Walgreens’ products include over-the-counter medicine and consumer products, pharmacy services, and photo services. Walgreens has expanded through a series of strategic acquisitions. In March 2011, Walgreens acquired Drugstore.com and Beauty. com. Two years later, Beauty.com was named by Internet Retailer Magazine in its Top 100 online retail sites list. In July 2012, Walgreens paid $6.7 billion for a 45% stake in Alliance Boots and acquired a drug store chain that included USA Drug, Super D Drug, May’s Drug, Med-X, and Drug Warehouse. In 2014 Walgreens purchased the remaining 55% stake in Switzerland-based Alliance Boots that it did not already own. A new holding company was created that now trades as WBA in lieu of the previous WAG ticker. Walgreens also maintains a commercial book of pharmacy business through multiyear agreements with Express Scripts, Caremark, and other commercial payers. Walgreens was included in Fortune’s World’s Most Admired Companies list for the 20th consecutive year and was ranked 37th overall in revenue on the Fortune 500 list of largest U.S.-based companies. Walgreens is actively pursuing innovative growth strategies involving cloud-based mobile phone and tablet-accessible services. In October 2015 WBA announced its impending acquisition of rival Rite Aid for $17.2 billion.

Fresenius Medical Care (NYSE: FMS) provides dialysis and related products, inpatient/outpatient care products, and services such as engineering to hospitals and related facilities. Fresenius operates more than 2,100 dialysis centers in North America and has over 100,000 employees. These facilities routinely provide medically necessary renal care to hundreds of thousands of patients with chronic kidney failure, a condition
that affects more than 2.1 million individuals globally.

NAPA (The National Automotive Parts Association) is an American-based voluntary trade association that distributes and sells over 400,000 products to auto and industrial sectors. NAPA’s sole member and majority owner is Genuine Parts Company (NYSE: GPC). Its infrastructure and commitment to quality produce higher revenues, a stronger operating margin, and a more-credit-positive debt-to-EBITDA ratio than found in the rest of the industry.

ExchangeRight is committed to providing long-term, stable income and asset preservation to accredited 1031 and 1033 investors. Our goal is to consistently deliver 1031-exchangeable DST portfolios of long-term, net-leased properties backed by investment grade corporations. We target corporate tenants that successfully operate in the necessity retail space to provide investors with stable and predictable income. ExchangeRight’s long-term exit strategy is to provide greater diversification and value to investors by combining multiple portfolios of investment grade, net-leased assets in a portfolio sale or 721 exchange roll-up.