This Offering is designed for investors seeking to participate in a 1031 tax-deferred exchange as well as investors seeking a diversified net-leased real estate investment on a cash basis. 1031 investors must invest for a minimum of $100,000, which may be waived or lowered according to the Manager’s sole discretion.

ExchangeRight Net-Leased Portfolio 16 DST is a portfolio of 19 single-tenant diversified into long-term, net-leased portfolio with a 6.78% initial cash flow projection to investors

ExchangeRight Net-Leased Portfolio 16 DST is a portfolio of 19 single-tenant, long-term net-leased retail assets that are 100% occupied and operated by Advance Auto Parts, Dollar General, Family Dollar, Hobby Lobby, Sherwin Williams, Tractor Supply, and Walgreens. The portfolio is composed of high-quality tenants with strong credit and provides the investor with access to a diversified portfolio. First-year net operating income is diversified as follows:

The Sponsor of the Offering is retaining at least a 1% ownership interest in the portfolio and is offering up to 99% of the beneficial interests in the DST to accredited investors. The total offering amount is $61,252,000, of  which $28,530,000 is equity and $32,722,000 is long-term fixed-rate financing. The trust closed on the portfolio of properties on May 30, 2017, with 10-year interest-only nonrecourse financing with a stated annual rate of 3.978% and a weighted-average lease term of 12.5 years.

This Offering is designed for investors seeking to participate in a 1031 tax-deferred exchange as well as
investors seeking a diversified net-leased real estate investment on a cash basis. 1031 investors must invest for a minimum of $100,000, which may be waived or lowered according to the Manager’s sole discretion.

We designed our exit strategy with the goal of providing investors stable cash flow and value-added returns. We  believe that this is best achieved by aggregating our net-leased portfolios together to be sold, acquired, or listed in the public markets. Combining portfolios helps mitigate lease and debt rollover risk  through scale and diversification. Bringing the larger, aggregated portfolio to the public markets aims to capitalize on the premium typically paid for liquidity, diversification, and convenience. This strategy is anticipated to provide investors with the opportunity to sell and perform another 1031 exchange or exchange their DST interests for ownership in a REIT under IRC section 721 in a REIT sale, merger, IPO, or public listing. 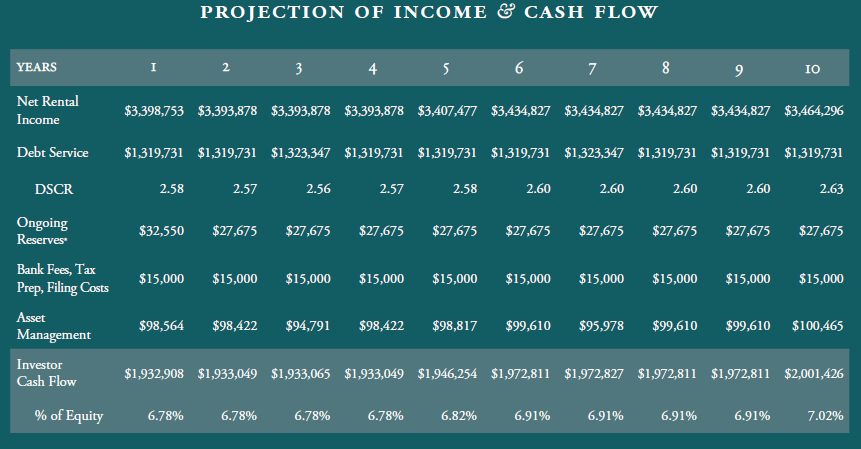 * $554,218 of initial tax and insurance prepaids and reserves, and reserves for operations and repairs have been funded at the time of the loan closing. In addition, $600,000 has been initially funded in a rollover reserve with lender for future tenant improvement and leasing commissions, bringing total reserves to $1,154,218 at closing. The DST is additionally reserving between $27,675 – $32,550 per year to provide additional operational reserves for the benefit of the trust, which is reflected in the ongoing reserve figures presented above.

The following leases were entered into directly with the tenants’ parent entities or are guaranteed by the tenants’ parent entities which have an investment-grade rating with Standard & Poor’s or Moody’s: Advance Auto Parts, Dollar General, Sherwin Williams, and Walgreens. The Family Dollar, Hobby Lobby, and Tractor Supply leases are entered into directly or guaranteed by the full faith and credit of the respective Tenants’ parent corporations (Family Dollar Stores, Inc., Hobby Lobby Stores, Inc., and Tractor Supply Company, respectively).

The Loan Agreement requires a Qualified Transfer of the loan by the end of year seven of the loan term or a cash flow sweep will commence. As the Trust’s objective is to maximize value to Owners through a portfolio aggregation and sale, transfer, or merger prior to year seven to facilitate a tax-deferred exchange pursuant to Section 1031 of the Code, or exchange roll-up transaction pursuant to Section 721 of the Code, this provision is not expected to have an impact on the Trust as it is expected to meet the Qualified Transfer requirements (refer to the “Exit Strategy” in Exhibit I of the Memorandum). As a result, ten years of cash flows are being presented to show the expected cash flows of the Properties to the Trust including following a Qualified Transfer prior to the end of year seven.

Investing in this offering involves risk. Please review the Private Placement Memorandum in its entirety, including especially the section that
outlines the risks of his offering, before making any investment decision.

Walgreens (NASDAQ: WBA) is the largest drug retailer in America. Walgreens employs approximately 248,000 people and operates 8,678 stores throughout the 50 states; Washington DC; Puerto Rico; and Guam. Walgreens’ products include over-the-counter medicine and consumer products, pharmacy services, and photo services. Walgreens has expanded through a series of strategic acquisitions. In March 2011, Walgreens acquired Drugstore.com and Beauty.com. Two years later, Beauty. com was named by Internet Retailer Magazine in its Top 100 online retail sites list. In July 2012, Walgreens paid $6.7 billion for a 45% stake in Alliance Boots and acquired a drug store chain that included USA Drug, Super D Drug, May’s Drug, Med-X, and Drug Warehouse. In 2014 Walgreens purchased the remaining 55% stake in Switzerland-based Alliance Boots that it did not already own. A new holding company was created that now trades as WBA in lieu of the previous WAG ticker. Walgreens also maintains a commercial book of pharmacy business through multiyear agreements with Express Scripts, Caremark, and other commercial payers. Walgreens was included in Fortune’s World’s Most Admired Companies list for the 20th consecutive year and was ranked 37th overall in revenue on the Fortune 500 list of largest U.S.-based companies.

Sherwin-Williams (NYSE: SHW) is a Fortune 500 company founded in 1866. It manufactures, distributes, and sells general building materials including paints, coatings, and related products to professional and retail customers throughout the Americas and Europe. It is the largest coatings manufacturer in the United States and the third largest in the world, operating facilities in well over 100 countries. Sherwin-Williams products are sold under Dutch Boy, Krylon, Minwax, Thompson’s, and Water Seal brands. Sherwin-Williams-branded products are sold in over 4,000 company-owned stores while its other brands are carried by other retailers, hardware stores, and industrial distributors. The company operates in four segments: Paint Stores Group, Consumer Group, Global Finishes Group, and Latin America Coatings Group. As of December 31, 2016, its Paint Stores Group segment operated 4,180 company-operated specialty paint stores; Global Finishes Group segment operated 288 company operated branches; and Latin America Coatings Group segment operated 339 company-operated stores.

Advance Auto Parts Inc. (NYSE: AAP) is an aftermarket retailer of automotive parts and supplies as well as a provider of auto maintenance services. It operates nearly 4,000 stores in 40 states, Puerto Rico, and the Virgin Islands and employs about 55,000 team members. Advance Auto Parts typically has about 19,000 SKUs in each store and access to 115,000 SKUs at regional centers. Customers have access to nearly half a million SKUs by ordering directly from vendors. Many products include a “good, better, best” recommendation, and Team Members have access to a system to help customers choose the best product; this embodies Advance Auto Parts’ promise, “Service is our best part.”® Additionally, each store generally has two “part pros” with extensive knowledge and experience in auto maintenance. The current increase in new vehicle sales provides opportunities to demonstrate their two key strategies of Superior Availability and Service Leadership and to lead the way for service providers by improving delivery speed and reliability, leveraging supply chain advancement, and continuing to open new stores in new markets.

Hobby Lobby, Stores, Inc. owns and operates a chain of over 600 arts and craft stores throughout the United States, which are estimated to employ over 23,000 individuals. The average store is over 55,000 square feet, and offers more than 70,000 arts, crafts, hobbies, home decor, Holiday, and seasonal products. Hobby Lobby ranks 138th on the Forbes list of America’s Largest Private Companies, ahead of competitors Jo-Ann Stores, LLC, Hancock Fabrics, Inc., and The Michaels Companies, Inc. Hobby Lobby is privately held and does not carry any long-term debt. The company has pledged to serve employees and their families through the work environment, a culture molded to build character, and operating procedures designed to facilitate a healthy work-life balance. It pays a minimum full-time hourly wage that is more than 90% above the federal standard, and offers a generous benefit plan that includes medical, dental, prescription drug, long-term disability, and life insurances. The company also substantially supports several charitable organizations and gives discounts to charities and schools.

Dollar General (NYSE: DG) is one of the nation’s largest small-box discount retailers. Dollar General has over 121,000 employees operating over 13,300 locations in 43 states. It strives to make shopping for everyday needs simpler and hassle-free by offering a carefully selected assortment of the most popular brands at low everyday prices in small,  convenient locations. Dollar General Corporation was founded in 1939 and is based in Goodlettsville, Tennessee.

Family Dollar is one of the nation’s largest small-box discount retailers. It has over 50,000 employees operating a chain of over 7,900 stores across 45 states primarily serving low- to middle-income consumers. It serves smaller neighborhoods with a focused selection of major brand names and private label brands to reduce costs, lower prices, and provide easier access for the end customer. In 2015 Family Dollar became a wholly owned subsidiary of Dollar Tree (NASDAQ: DLTR).

Tractor Supply Co. (NASDAQ: TSCO) is a leading chain of retail stores that each carry products related to home improvement, agriculture, truck maintenance, livestock, equine care, and household pet care. It employs over 17,000 individuals and operates over 1,200 stores across 47 states. Stores are strategically located in towns outlying major metropolitan areas and in rural communities. It was listed by Forbes among the 100 fastest growing businesses.

ExchangeRight is committed to providing long-term, stable income and asset preservation to accredited 1031 and 1033 investors. Our goal is to consistently deliver 1031-exchangeable DST portfolios of long-term, net-leased properties backed by investment grade corporations. We target corporate tenants that successfully operate in the necessity retail space to provide investors with stable and predictable income. ExchangeRight’s long-term exit strategy is to provide greater diversification and value to investors by combining multiple portfolios of investment grade, net-leased assets in a portfolio sale or 721 exchange roll-up.